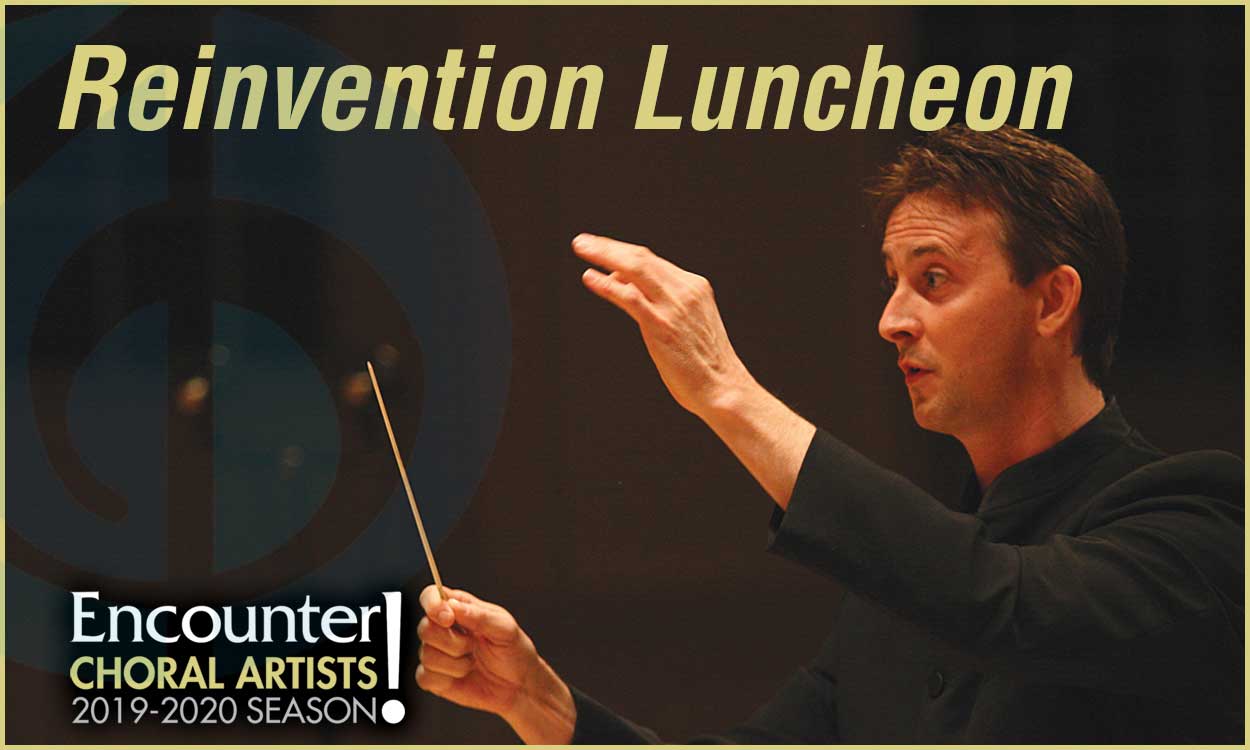 Join us for this exciting luncheon as guest speaker Todd Craven, Associate Conductor of the Buffalo Philharmonic, enlightens us on his transformation from trumpet virtuoso to conductor extraordinaire, reinventing his career as a musician. Sopranos Jenny Kim-Godfrey and Robyn Rocklein will perform passionate Tchaikovsky Duets with pianist Joseph Holt, Artistic Director of Choral Artists.

Education and outreach to young, pre-professional singers, essential to fulfilling the vision and mission of Choral Artists, is the focus of this benefit luncheon. Each year, eight young singers, typically aged 18 to 22, are selected through competitive audition to join the professional vocal ensemble as apprentice singers. Through the Apprentice Program, we help to develop and inspire the next generation of vocal musicians. The “Reinvention” theme of this luncheon, specific to the transformation that guest speaker Todd Craven underwent, also aligns with the commitment and inspiration required of students working toward music careers, transforming the budding musician into the professional. Choral Artists community outreach brings together disparate segments of the community through programming with wide appeal and inclusion of a variety of musical periods and genres.

A prize-winner in national and international competitions, Todd has performed as a trumpet player with the New York Philharmonic, Cincinnati Symphony and at the Spoleto Festival and Tanglewood Music Center. He made his conducting debut with members of the Sarasota Orchestra and chorus in Maurice Durufle’s Requiem in 2012 and his international conducting debut in St. Petersburg, Russia, conducting in a concert with the St. Petersburg Chamber Philharmonic. He has since conducted the Baltimore Symphony, Peabody Symphony Orchestra, Edmonton Symphony, Buffalo Philharmonic, as well as orchestras in Poland, Bulgaria, and Ukraine.

Todd’s conducting mentors include Marin Alsop, Larry Rachleff and JoAnn Falletta. He holds a Graduate Performers Diploma from the Peabody Conservatory, and Master of Music from Indiana University and the University of Michigan.

Hailed as “…a fearless and confident performer with a beautiful high voice with excellent flexibility,” Korean-American coloratura soprano Jenny (Ji-Sun) Kim-Godfrey is quickly gaining notoriety for her “nightingale tone” (Virginia Zeani) and as “an invigorating stage animal and gifted recitalist…a performer ready to forge new vistas!” (Maestro Gary Thor Wedow, New York Philharmonic). Jenny has concertized throughout the United States, Canada, South Korea, and Italy. Jenny starred as the Swedish Nightingale, Jenny Lind, in the Florida Premiere of Barnum’s Bird with the Choral Artists of Sarasota.

Nebraska native Robyn Rocklein is known for her vibrant and flexible zwischen-fach voice and has appeared as a soloist in England, Austria, Germany, and throughout the USA. Most recently hailed in the Orlando Sentinel for her “winningly devilish Carmen” who brought a “richness of tone in Carmen’s arias”, her roles include the title roles in Carmen, Brook’s The Tragedy of Carmen, La Périchole, Dido and Aeneas, Iphigénie en Tauride, The Rape of Lucretia, and Adalgisa in Norma, Federico Garcia Lorca in Ainadamar, Elizabeth Proctor in The Crucible, and Hansel in Hansel and Gretel. She also had the pleasure of working with composer Libby Larsen in the Florida Premiere of Barnum’s Bird as General Tom Thumb with the Choral Artists of Sarasota.