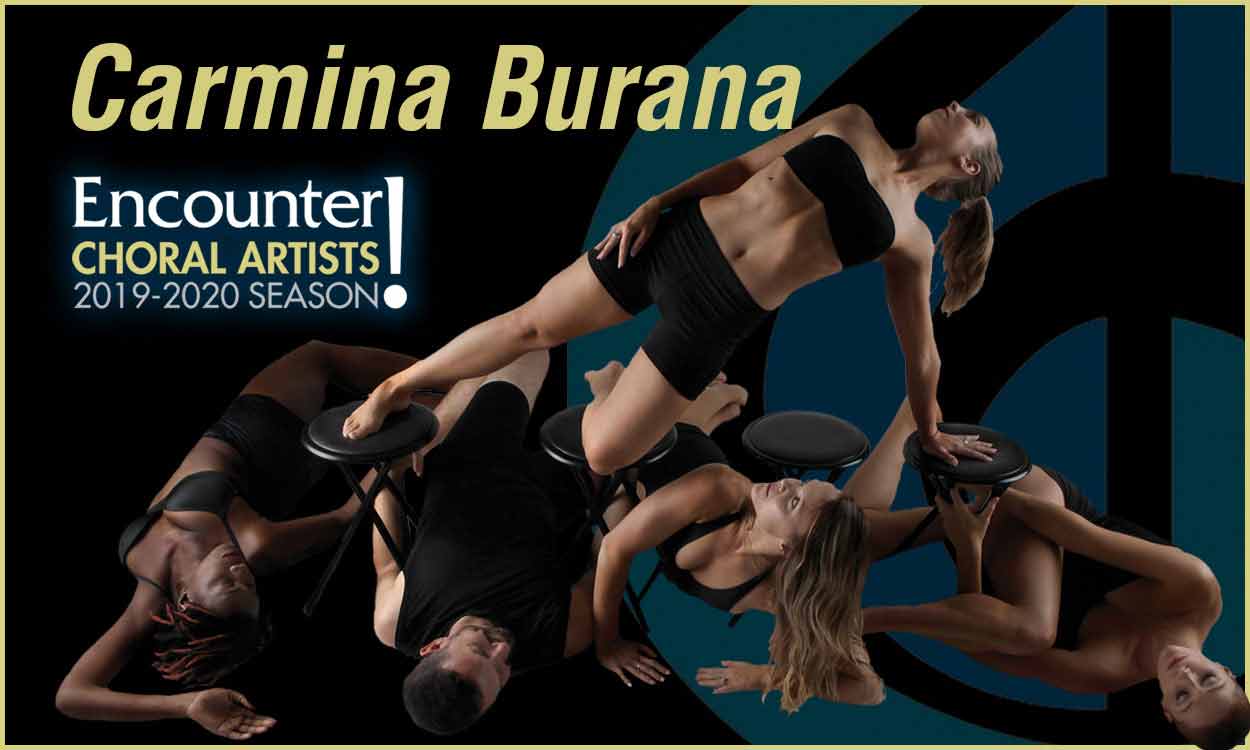 Andrew Lapp and Michael Stewart are featured pianists and the Venice Symphony percussion section will dazzle with three separate percussion selections. This is a co-presentation with the Venice Institute for Performing Arts.

Click the button below to purchase Carmina Burana tickets directly from the Venice Performing Arts Center ticketing system. A new window will open for that transaction. Return to the Choral Artists website to purchase tickets for our other performances.

To learn more about this fabulous production, join us for Concert Insights on February 11 / 10:00 AM at the Center for Arts & Humanity (1226 N. Tamiami Trail, Sarasota). Choral Artists Artistic Director Joseph Holt and Sarasota Contemporary Dance’s Artistic Director and Choreographer Leymis Bolaños Wilmott will be discussing the creative processes behind creating Carmina Burana. This is a FREE event but registration is required as seats are limited / coffee and light snacks will be served.

Catherine Wethington​, a rising star of a new generation of American coloratura sopranos, has dazzled audiences in North America and Europe with her “sumptuous coloratura and other-worldly pianissimi” (Herald-Tribune). Opera Canada Magazine describes Ms. Wethington as having the “vocal power and dramatic finesse… [and] vocal fireworks” necessary for bel canto opera. In January 2019, Wethington was a finalist and winner in the Concorso Lirico Internazionale Gigli-Franci, in Rome, Italy. Comfortable in both comedic and dramatic roles, she has won acclaim as Gilda in Verdi’s ​Rigoletto​ , Zerlina in Mozart’s ​Don Giovanni​ , Eurydice in Offenbach’s ​Orpheé aux enfers​ , Suor Genovieffa in Puccini’s ​Suor Angelica​ , Olympia, in Offenbach’s ​Les Contes d’Hoffmann​ , and Monica, in Menotti’s ​The Medium​ . In April 2019, Ms. Wethington debuted as a featured soloist with the La Musica Festival in Sarasota, Florida. Also, in April 2019, she debuted in the role of Amina, in Bellini’s ​La Sonnambula with Opera Niagara. In July 2019, she made her debut in Busseto, Italy as Medora in Verdi’s ​Il Corsaro, ​ directed by Marco Gandini, ​ and she has recently returned from a concert tour with Kamerfest 2019 in Kosovo, North Macedonia and Albania.

In August 2018, the Northern Virginia native made her London debut in Cadogan Hall as a guest artist with the London Bel Canto Festival and was also a highly acclaimed soloist under the baton of the great Maestro Richard Bonynge. In 2015, she made her debut on the Kennedy Center Concert Hall stage as a soprano soloist in Carl Orff’s Carmina Burana which she has repeated with the Choral Arts Society of Washington and the Choral Artists of Sarasota. Ms. Wethington has been a featured soloist in concerts and recitals in North America and in Europe, including in a televised concert celebrating tenor, Carlo Bergonzi. Ms. Wethington holds music degrees from the University of Michigan and The Catholic University of America, where she studied with Ms. Sharon Christman. She continues her vocal studies with the internationally acclaimed Dr. Maria Vetere and Metropolitan Opera star, Ms. Aprile Millo​.

During the 2019-20 season, González returns to Opera Tampa for all mainstage productions. He sings Samuel in the company premiere of Gilbert and Sullivan’s The Pirates of Penzance and reprises his role as Assistant Conductor for new productions of Carmen and Aïda. Additional credits include Assistant Conductor for Les pêcheurs de perles and La bohème, Counsel for the Plaintiff in Trial by Jury and The Gardener in the world premiere of Anton Coppola’s Lady Swanwhite.

Hailed by Opera News as “the very picture of youthful optimism and potential,” John Kaneklides’ “tenor voice cuts through all others with its richness and warmth” (Broadway World). This season Mr. Kaneklides made his Carnegie Hall debut performing World Premieres of orchestrated works by renowned composer Georgia Shreve and will be featured on the upcoming recording. Among his many concerts this season, he returned to his home state as a soloist in Handel’s Messiah with the Asheville Symphony Chorus. He recently reprised three of his now-signature roles, Alfredo in La traviata, the title role in Les contes d’Hoffmann, and Rodolfo in La bohème. Additionally, he joined Gulfshore Opera as a Professional Artist-In-Residence singing The Duke of Mantua in Rigoletto, Camille in The Merry Widow, and the title role in Faust in concerts throughout the region. This season he also premiered as the title role in a new English translation of the The Tales of Hoffmann, with Skylight Music Theatre. Mr. Kaneklides’ recent engagements include The Guide turned Narciso Borgia in the world première of Blumenfeld’s Borgia Infami with Winter Opera St. Louis, Laurie in Adamo’s Little Women, Micah in Floyd’s Slow Dusk, Villers in the New York première of Floyd’s Prince of Players, Ralph in H.M.S. Pinafore, Nanki-Poo in The Mikado, Henrik in A Little Night Music, and Lt. Joseph Cable in South Pacific. His concert appearances include the tenor soloist in Mendelssohn’s Elijah and Handel’s Messiah and most recently, Orff’s Carmina Burana with The Florida Orchestra.

Mr. Kaneklides has participated in the young artist programs of Bel Canto at Caramoor and Opera North. He is an award-winner, receiving honors from several prestigious vocal competitions, such as The International Liederkranz Foundation Competition, the Metropolitan Opera National Council Auditions Arkansas & South Carolina District, The Orpheus National Competition, The Opera Guild of Charlotte Competition, and The Nico Castel International Master Singer Competition.

Leymis Bolaños Wilmott is the Founder and Artistic Director of Sarasota Contemporary Dance. Recently featured in Sarasota Scene Magazine’s Arts & Cultural Issue: Ladies of the Arts, Leymis has been the recipient of numerous artistic achievement and leadership awards throughout her career. She received the esteemed Dance Magazine award for Southeast Best Choreographer and was listed in Sarasota Magazine as one of the Top 28 Most Powerful People in the Arts. Her 80+ dance works have included collaborations with artists and organizations of various disciplines: Sarasota Orchestra, Choral Artists of Sarasota, Westcoast Black Theater Troupe, Asolo Rep, Salvador Dalí Museum, Kaleidoscope, John and Mable Ringling Museum, Art Center of Sarasota, Stephen Miles of New Music New College, composer Eduard Cosla, percussionist Scott Blum, Mark Dancigers of NOW Ensemble, and the multi-talented Francis Schwartz. Her works have been performed nationally at the John F. Kennedy Center, Ailey Citigroup Theater in NYC, Colony Theater and Jackie Gleason Theatre in Miami, and internationally in Ramallah, Argentina, and Spain.

Leymis pioneered the Dance and Healing certificate at the University of Florida and holds a Master of Fine Arts in Performance and Choreography from Florida State University. Her research in dance as a healing art form and its ability to harness and foster community building came to fruition in 2006 when she and Rachael Inman founded Fuzión Dance Artists, now Sarasota Contemporary Dance.

Leymis is a professor of dance at New College of Florida, a certified Pilates instructor, and the Lead Dance Instructor at Parkinson’s Place since 2012. She served as Vice President of the Florida Dance Association from 2013-2017, is a member of the Arts and Health Coalition, and is the most sought-after collaborator in Sarasota and Tampa Bay. Her most precious honor, however, is being married to her husband, Kavin, and mother of eight-year-old Charles Edward and two-year-old Valda Elizabeth.

Leymis Bolaños Wilmott and Rachael Inman began working together in Florida State University’s graduate program in 2000. Not only did the two share an Arabic heritage, most importantly, they shared a vision to collaborate, create and celebrate through life experiences. They both spent time developing programming for the FSUdanceSARASOTA initiative, and in 2002 Bolaños Wilmott and Inman founded Fuzión Dance, the first professional contemporary dance company in Sarasota. In 2006, they formed Fuzión Dance Artists as a non-profit 501(c)(3) corporation. After a decade of establishing its presence under the continued Artistic Direction of Leymis Bolaños Wilmott, Fuzión Dance Artists became Sarasota Contemporary Dance. The organization felt it was time for a change, and under this new name have become a mainstay arts organization in the region. Learn more SarasotaContemporaryDance.org

Sarasota Young Voices was founded by Geneviève Beauchamp in 2007 and has quickly grown into one of Florida’s best children’s choruses.

Every week, school-aged singers from Sarasota and Manatee counties meet to sing, to laugh, and to foster a love of music. While building their musical skills, SYV singers learn how to serve their community by performing for a variety of events such as the Sarasota Orchestra, Gloria Musicae, Key Chorale, Belle Canto, and Artist Series Concerts of Sarasota. Currently, Sarasota Young Voices is a Choir-in-Residence at Church of the Palms and performs monthly in one or more of the services. In addition, each summer since the choir was founded there has been a concert tour for the older singers to gain experience performing in festivals and venues both nationally and internationally. Past tour destinations have included Greece, Vancouver, New Orleans, Quebec, Denver, Paris, London, and Dublin. Learn more SarasotaYV.org

Michael Burritt
The Doomsday Machine – aurally and visually captivating work that explores a multitude of wood, metal and membraned sounds in an explosively energetic dance, based upon the Star Trek episode

Carl Orff
Carmina Burana – Songs of Beuern: Secular songs for singers and choruses to be sung together with instruments and magical images