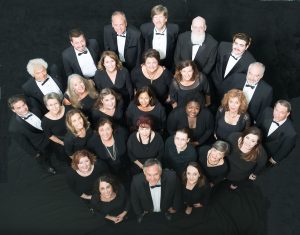 (Sarasota, FL) The 35 singers of the Choral Artists of Sarasota lift their voices to “Rejoice!” in a concert of jubilant choral music celebrating the holiday season, Sunday, December 9, 4 p.m., at First Church, 104 South Pineapple Ave., Sarasota. “Rejoice!” also marks the 10th anniversary of Dr. Joseph Holt, the innovative leader of the professional choral ensemble. Festive favorites and timeless carols include four pieces from the “Nutcracker” uniquely arranged for chorus; “O Holy Night,” arranged by Mack Wilberg, the conductor of the Mormon Tabernacle Choir; “Silent Night,” “We Wish You a Merry Christmas,” and “Hark! the Herald Angels Sing.” Tickets are $35 in advance and $40 at the door. $5 student tickets are available with ID at the door. There will be a reception to celebrate Dr. Joseph Holt’s 10th anniversary after the concert, 6-8:30 p.m., at Salute!, 23 N. Lemon Ave. Tickets to this reception are $75. For tickets and info, visit www.ChoralArtistsSarasota.org or call 941-387-4900.
The group’s artistic director and conductor, Joseph Holt, says that the 2018-2019 season highlights the dynamic talents of the group’s professional singers. “Each concert has a unique theme, which underscores the ensemble’s wide-ranging strengths,” he says.

“Rejoice!” is jubilant in nature—reflecting the holiday spirit, while commemorating the two significant anniversaries. According to Holt, the songs of joy span the gamut from jubilant fanfare to gentle expressions of praise.
The celebration begins with Randol Alan Bass’ exultant arrangement of “Gloria.” The piece holds a special place in Holt’s heart; he used it to open his first concert with the ensemble in December 2009.
“It’s a joyful hymn of praise and one of sacred music’s most uplifting choral works,” says Holt. “It’s also a way to show our gratitude to the audiences who have made our celebration of choral music possible over so many years.” He adds that, “Peace on earth to men of good will” is the most important phrase in this piece for me. In these divided times, true peace is what we all desire.”

“The King Shall Rejoice” is one of Handel’s beloved “Coronation Anthems.” According to Holt, it’s a celebratory work full of pomp and fanfare in the context of Psalm 21. “This is Handel at his most exuberant,” he says. “He designed the piece to be performed when King George II was crowned in 1727.”
As always, Holt showcases new arrangements and works. This concert offers several fresh discoveries. “Dan Forrest created a sparkling new arrangement of Felix Mendelssohn’s ‘Hark! the Herald Angels Sing,’” says Holt. “It’s a pure joy from beginning to end.”

Other new approaches to traditional carols include Michael John Trotta’s arrangement of “Silent Night.” According to Holt, “It maintains a feeling of hushed quiet. There’s a short aleatoric section; the singers repeat the same phrase at different times and speeds. The effect is ethereal, highlighting the birth in a reverential manner.”
Holt also seeks out original compositions. “The Alleluia” by Norwegian composer Kim André Arnesen is a single word composition, which continues the fanfare mood of the program’s first half. According to Holt, “It has a distinctive Scandinavian quality in the sound, with some elements that suggest folk music.”
Other highlights include four pieces from “The Nutcracker,” arranged for chorus, and “O Holy Night,” arranged by Mack Wilberg, conductor of the Mormon Tabernacle Choir. The program concludes with a raucous, new setting of the “Twelve Days of Christmas.” “This clever arrangement incorporates different styles of music and even direct quotes by other composers as the romp through the 12 days builds to the festive end. It’s the perfect conclusion for this year’s holiday celebration,” says Holt.
“The holidays bring people together to renew their appreciation and joy for each other. We’re grateful to share our love for choral music with the outstanding Sarasota audiences.”